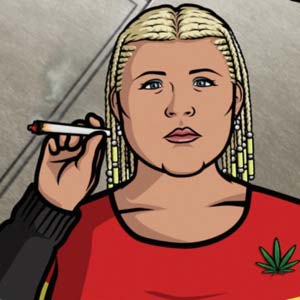 Grew Up… on her family’s dairy farm in Wisconsin, where she helped raise cows and produce milk and cheese and enjoyed an affair with a milkhand named Jorge. She then paid her way through college using winnings from an underground bare-knuckle boxing ring.

Living… a tumultuous life of debauchery. Pam has been getting into trouble ever since she left Wisconsin. Her list of misdeeds and adventures is legendary. She was deported for smuggling marijuana INTO Jamaica, she’s street raced against Japanese crime lords, and she's done enough cocaine to kill Scarface. Now that she works in HR you might have expected her to settle down, but Pam remains the same incorrigible party animal that she’s always been, and frequently downs 40 ounce bottles of malt liquor while working. Although in her defense, she isn’t the only person at ISIS who drinks on the job.

Profession… Human Resources Director at ISIS (International Secret Intelligence Service). Pam’s job seems tame compared to the field agents she works with, but like the rest of ISIS, Pam often finds herself tagging along on even the most dangerous missions. Like just about everyone else at the agency Pam is uniquely ill-suited to her job – she’s granted incredibly private information about the employees and also has the biggest mouth in the office.

Interests… racing fast cars, getting in dangerous fights, and doing mind-boggling amounts of drugs. These activities – combined with her legendary libido – take up most of her time.

Relationship status… constantly on the hunt for casual sex. Pam is a bisexual with no real standards. She tries to have sex with just about everyone she meets, and has seduced almost all of her coworkers at one time or another. While Pam is generally considered repulsive, Archer says that she’s the best lay that he’s ever had – yet another unconventional talent from the underestimated Pam Poovey.

Challenge… working at ISIS. The agency is a comedy of errors, and rarely embarks on a mission without it spiraling into disaster. You’d expect the intrigue to be limited to the field agents, but even the HR director constantly finds herself on insane adventures. Sure, people try to kill them all the time – but Pam wouldn’t trade it for the world. It’s the biggest thrill there is.

Personality… excitable and gluttonous. Pam’s appetite for life (and everything else) is considerable, and she’s always gorging herself with food, drugs, or sex. Pam is the happiest of the ISIS employees, and seems to draw enjoyment from the dangerous and ridiculous situations that they often find themselves involved in.

Pam Poovey's popularity ranking on CharacTour is #1939 out of 5,600+ characters. See our top-ranked characters and read their profiles.