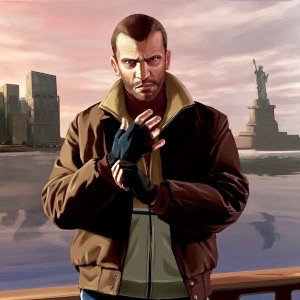 Grew up… in Yugoslavia. Niko’s father was an alcoholic and his brother died in the Bosnian War. When he was just a young teenager, he became a soldier in the Yugoslav Wars, serving as a helicopter pilot and infantryman. His unit was betrayed and ambushed, and Niko was the only surviving member.

Living… in Liberty City. Niko just recently arrived in America to begin his new life after he struggled to find work after the war and spent ten years working in the European criminal underworld. With the help of his cousin Roman who claims to run a successful business in Liberty City, Nike plans to live the American dream in Liberty City.

Profession… hitman, mobster, and criminal. Niko takes work wherever and from whomever he can get it. He does jobs for the Russian Mafia and makes friends with various crime lords around the city, willing to do just about any job – no matter how violent.

Interests… making lots of money and protecting his loved ones. Although Niko expresses a general distaste for American culture, he begrudgingly agrees to go out bowling or to play darts with his cousin Roman whenever he calls. He likes to spend his time meeting and dating new women, and often takes them out for dinner and other activities around Liberty City.

Relationship Status… single and looking. Niko meets both Kate McReary and Michelle through Roman and his relationships with the McReary brothers. His good manners and sophisticated charm make him an attractive mate to both girls, though Niko has to decide which he likes most.

Challenge… making a life for himself in Liberty City and seeking his revenge. Although Niko came to Liberty City to help out his cousin Roman, who is more down on his luck than he let on, Niko also harbors an ulterior motive: finding and eliminating Florian Cravic and Darko Brevic, the men who betrayed his troop during the war. He’ll have to build up his connections and his power in order to get close to the powerful criminal who now resides in Liberty City.

Personality… cynical, no-nonsense, and perpetually calm. Niko is a polite man who is quiet and helpful to those he works with. He’s intensely protective of his loved ones and will do anything to keep them safe. He’s mostly all business, but Niko does have a sarcastic sense of humor and as well as a short-temper if people betray him, due to his past experiences. However, his life in the war has left him as a very cynical and critical man, who remains disdainful of drugs and American culture.

Niko Bellic's popularity ranking on CharacTour is #1995 out of 5,600+ characters. See our top-ranked characters and read their profiles.