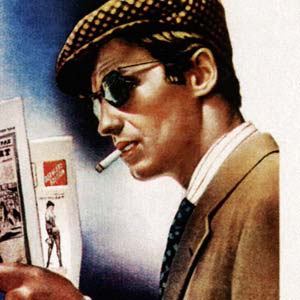 Living… on the run. Michel always seems to be running away from someone or something.

Visiting… Paris, after stealing an Alfa Romeo in Marseilles. Michel is only stopping over in the French capital to pick up his girlfriend Patricia. He plans to head to Rome, where he’ll escape the French police that are trailing him for murder.

Profession… petty thief. Michel isn’t picky about who he steals from. He’ll take money from an old girlfriend just as easily as he’ll steal a stranger’s car.

Interests… cigarettes, money, and fast cars. Michel doesn’t appreciate the slow, idle life. He prefers to live in the fast lane. As he says to himself on the motorway to Paris, “Cars are meant to run, not stop!”

Relationship Status… dating a young American journalist named Patricia. But Michel, like any good Frenchman, always seems to have more than one woman at the same time. Like his idol, Humphrey Bogart, he’s a sucker for a beautiful dame: “I always fall for girls who aren’t cut out for me.”

Challenge… get out of France before the police nab him. Michel, used to running from the law, is in a bit over his head after he murders a police officer. Broke and friendless, he needs Patricia to help him get to Rome.

Personality… vain, sociopathic and suave. Michel sees himself as a cool, American-style gangster. You’ll always catch him with a cigarette dangling from his lips, a la Humphrey Bogart. He even imitates Bogie’s signature move of swiping his lips with his thumb.

Michel Poiccard's popularity ranking on CharacTour is #3287 out of 5,600+ characters. See our top-ranked characters and read their profiles.