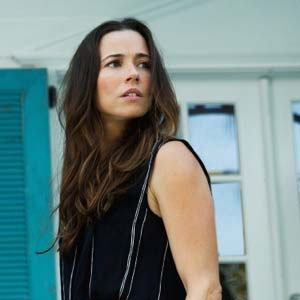 Grew Up… in paradise. Meg’s parents owned (and still own) a hotel in the Florida Keys. Their house looked out on shady palms, white sand, and turquoise waters. Meg often played the role of disinterested onlooker as her older brothers engaged in horseplay on the beach.

Living… in the Keys, like most of the Rayburn clan, watching over the family legacy as her parents grow old. Though engaged to a policeman named Marco Diaz, she still maintains her own residence, a comfortable house not far from where she grew up.

Profession… lawyer. Meg studied law up in “Yankee country” at Florida State. (Only in South Florida is North Florida considered “Yankee.”) Her first client out of law school was her father, who asked her to take charge of his estate and general legal affairs.

Interests… making sure her mother is comfortable; tequila; and passionate dalliances.

Relationship Status… engaged to Marco. Marco is loving, responsible, and handsome, everything Meg wants and needs in a man. Yet she is in the throes of an affair with Alec, one of her legal clients, who flies down from NYC to see her. Indeed, her long-standing habit of cycling through boyfriends continues even as she prepares for marriage. You might say she has some commitment issues.

Challenge… dealing with the return of her eldest brother Danny. A prodigal son, Danny announces his wishes to come home and rejoin the family business. Meg is happy to see him and wants it to work out (unlike her brother Kevin). But his return dredges up memories of the darkest chapter of her past that she’s managed to keep buried.

Personality… even-keeled, highly intelligent, and caring, Meg is the “normal” one in the family. She is open-minded, compassionate, and reasonable until the conversation turns to her, at which point she often assumes a hyper-defensive posture. She likes to talk about other people’s issues, not her own. She has trouble owning up to her mistakes; she’d rather ignore them and, better yet, forget them.

Meg Rayburn 's popularity ranking on CharacTour is #4168 out of 5,300+ characters. See our top-ranked characters and read their profiles.