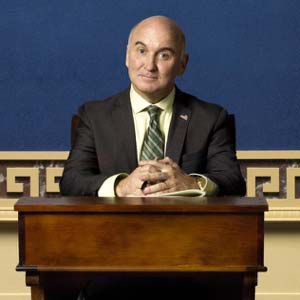 Grew Up… in Reno, Nevada. Louis didn’t have any friends as a kid.

Living… in a handsome Washington D.C. townhouse with fellow Republican senators Gil John Biggs, Robert Bettencourt, and Andy Guzman. Louis is the one with his name on the lease but he struggles to enforce most of his house rules. A clean freak, all he manages to do is implement the use of coasters. He subjects prospective maids to an intensive interview process, testing their ability to quickly clean red-wine carpet stains. “Room awareness is key,” he lectures them.

Profession… United States senator from the state of Nevada. Proudly “one of most outspoken critics of the homosexual agenda,” Louis receives the Council for Normal Marriage’s “Say No to Sodomy” award. For all of his senatorial prowess he is an abysmal public speaker, regularly digging himself into holes with failed or inappropriate one-liners.

Interests… designer dresses and women’s fashion. He is not much of a sportsman, although he wrestled a bit in high school.

Relationship Status… married. His affectionate wife Louise lives back in Nevada. Louise refers to him with such pet names as “my little giant” and “my bald eagle.” Together they have three daughters – Lola, Lorna, and Lori. His parenting style is “trust, but verify,” after Reagan’s attitude towards the USSR.

Challenge… dealing with Al Hickock’s campaign to take his senate seat. An avowed member of the Tea Party, Hickock is a gun-loving buffalo rancher who has legally killed two people. Louis, who has never shot a gun in his life, struggles to assert a new public image of himself as a non-pansy.

Personality… old-fashioned, finicky, and a bit timid. The most tender-hearted of his housemates, Louis is beyond terrified in the lead-up to his trip see the troops in Afghanistan as part of the Congressional delegation. A proud Mormon, he once served as a missionary in Iceland. He is at least a generation behind the times culturally. He asks his aides what a ‘meme’ and ‘TMI’ mean and is paranoid about talking in front of his drivers because “they all tweet now.”

Louis Laffer's popularity ranking on CharacTour is #5242 out of 5,600+ characters. See our top-ranked characters and read their profiles.