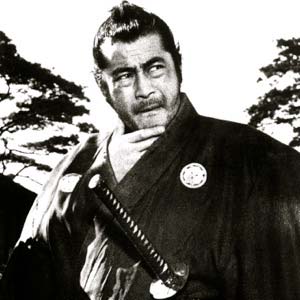 Living… in a small town in Japan in the 1860. The town is being terrorized by two warring gangs run by their respective heads, Seibei (backed by a silk merchant) and Ushitora (backed by a sake brewer).

Profession… samurai. But after the collapse of the Tokugawa Dynasty, he is unemployed and in search of work. Given that he is an expert swordsman, he has come to the small town to seek work as a bodyguard. His plan is to play both gangs off each other and get paid by both sides. He justifies his plan by saying, "I'll get paid for killing, and this town is full of people who deserve to die."

Interests… swords and sake – not always the best combination.

Relationship Status… none. Sanjuro is the ultimate loner, but he's not entirely heartless. He genuinely feels responsible to the good people of this forsaken town, and has to be their only protector.

Challenge… staying alive. Although he's as skilled in his swordsmanship and excels at concocting plans and pitting both sides against each other, he's also outnumbered. And he must face off against Unosuke, the younger brother of one of the sake dealer's bodyguards who brandishes a Colt .45. It’s not quite a fair fight when he has only a sword.

Personality… cunning, lethal, and rascally. Sanjuro doesn’t say much, but he doesn’t have to; his sword does his talking for him.

Kuwabatake Sanjuro's popularity ranking on CharacTour is #3888 out of 5,600+ characters. See our top-ranked characters and read their profiles.