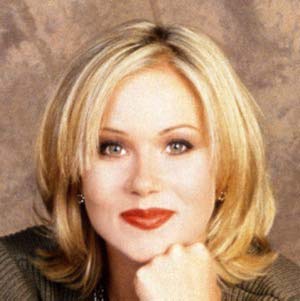 Living… in a suburb of Chicago with her family. Kelly has a reputation at Polk High School for being just as “easy” as her mother was. Having such an active social life has made living with her parents difficult, particularly for her father, who disapproves of the men she brings home.

Profession… high school student, though it’s difficult to know what Kelly plans to do with her life. Her grades are way below average, and the only things that seem to interest her at Polk High are the bad boys.

Interests… shopping and dating. Although she was precocious as a young child, Kelly’s intellect drastically decreased after she suffered a head injury on a family road trip. To this day, her memory is limited and her ability to reason severely impaired. Fortunately, that doesn’t significantly affect her twin passions.

Relationship Status… serial dater. Kelly’s numerous boyfriends have given her a unique insight into the nature of love. As she put it to her brother Bud: “Let me tell you the difference between men and women: we’re liars and you’re all idiots.”

Challenge… dodging her younger brother’s pranks. When she asked Bud for help with a book report on Robinson Crusoe, Bud has her write an essay on Gilligan’s Island instead.

Personality… gullible, simple, and credulous. One example of Kelly's air-headed comments is when she said, “Well, our teacher had on a pair of jeans that said Guess, and I said ‘size 42?’” While she’ll never lack for male companionship, just don’t expect sparkling conversation.

Kelly Bundy's popularity ranking on CharacTour is #3074 out of 5,600+ characters. See our top-ranked characters and read their profiles.