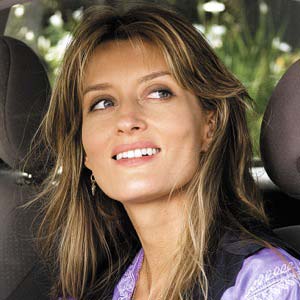 Grew Up… as soon as she became pregnant. Karen realized that her now ex-boyfriend, the famous author Hank Moody, probably wouldn’t make an ideal father. She had to learn to do most of the work of raising a child on her own.

Living… in Los Angeles. Karen followed Hank from New York to L.A., though she’s managed to make a separate life for herself on the West Coast.

Profession… architect. Karen has made her own way in the world. She’s a strong, independent woman who is capable of taking care of herself.

Interests… her daughter, Becca. Karen just wants the best for her child. She’s always willing to scold Hank when he sets a bad example for the young Becca. As she once told him, “Twelve-year-old finds naked slut in dad’s bedroom. Are you still feeling cute?”

Relationship Status… engaged to Bill, a publisher. Karen wants a nice, stable life for herself, though it’s obvious that she’s still hung up on the wild and promiscuous Hank. But she knows it will never work. As she says, “If I were to give myself to you, you would run for the hills, ‘cause you’re not in love with me. You’re in love with the idea... the idea of love.”

Challenge… figuring out how to be happy. Karen knows that her ultimate wish is to be with Hank, though she also realizes that he may not be capable of giving her the life that she needs and deserves. But can Bill?

Personality… feisty and strong. Karen is a beautiful and sophisticated woman who knows what she wants from life. As she says, “I question everything, it’s very healthy."

Karen Van Der Beek's popularity ranking on CharacTour is #3867 out of 5,600+ characters. See our top-ranked characters and read their profiles.