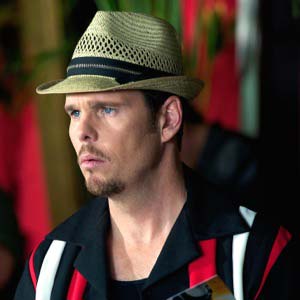 Grew up… in Queens, N.Y., where he got his strong New York accent. But “Drama,” as he’s known, would say that he got his real education in the Hollywood back lots in the 1990s.

Living… with his half-brother, Vincent Chase, in Vince’s Los Angeles mansion. This is a big step up for Drama, as he’s used to living in cramped, cheap apartments.

Profession… personal chef, fitness trainer, semi-major character on the cult TV classic Viking Quest – is there anything Johnny Drama can’t do? O.K., maybe he’ll never become a star like his baby bro Vince, but not for a lack of effort.

Interests… acting, women and himself. When his friend Eric accuses Drama of only ever loving himself, he retorts: “What’s not to love?” Johnny is narcissistic, yes, but in an endearing way. He’s obsessed with himself, but that doesn’t mean that he’s selfish. He’s always looking out for his kid brother and his friends.

Relationship Status… single. Drama loves the ladies, but it seems like he loves to talk about the ladies even more. As the oldest of the group, he’s constantly dishing out dating advice to Vince and his friends: “All I’m saying is don’t dump your girlfriend until you’ve flirted with a couple other young hotties.”

Challenge... re-starting his acting career and getting out from under Vince’s shadow. Drama is on the lookout for a role in anything, but often he just reminisces about “the Melrose years,” when he acted in hit shows like “Melrose Place.” Hopefully now that his baby brother Vince is a big star, doors will open for Drama. While Johnny is thankful for Vince’s aid, though, he doesn’t just want handouts or to be known simply as Vince’s brother. He had a legitimate acting career before Vince ever landed in Hollywood, and he hopes to do so again.

Personality… goofy, though Drama would probably say suave. Everyone in Hollywood knows Drama. He’s always trying to stay positive in rough situations, as a struggling actor has been trained to do after so many disappointments.

Johnny Chase's popularity ranking on CharacTour is #1639 out of 5,600+ characters. See our top-ranked characters and read their profiles.