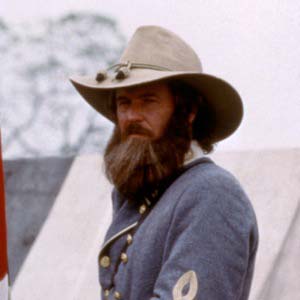 Living… on the military campaign trail. The war between the Union and the Confederacy has raged for two years now with no end in sight. Over the course of the war, Longstreet has asserted himself as Confederate General Robert Lee’s closest strategic advisor.

Visiting… Gettysburg, PA. Longstreet favored moving his corps south to defend against the Union’s attack on Vicksburg, MS. But Lee, coming from several decisive victories, opted to invade the north. And so Longstreet, Lee, and the Confederates move to engage the Union at Gettysburg, a road chokepoint near the Maryland border.

Profession… Lieutenant General of the Confederate Army, second-in-command to Lee. Longstreet rose the military ranks on the merit of his service in the Mexican-American War. “I remember storming the ramparts of Chapultepec with… my old friend Ulysses Sam Grant,” he reminisces. “There was some good men in that army.”

Interests… riding around on his horse, discussing tactics and delegating, and smoking his cigar.

Relationship Status… married to Louise, daughter of his commander in the Mexican-American War.

Challenge… winning the war.With both sides marshaling tens of thousands to Gettysburg, the impending battle, and every tactical decision, could have major implications in the war’s grand scheme. Though Lee’s main advisor, he tends to be more calculated and defensively inclined than Lee. “I don't know. I sometimes feel troubled,” he says. “Those fellas - those boys in blue - they never quite seem the enemy. I used to command some of those boys, swore on oath too.”

Personality… serious, but not solemn. He views war in human terms, not as some monolithic force of nature. He sometimes even cracks a joke in the pre-battle meetings to keep the mood light.

James Longstreet's popularity ranking on CharacTour is #3705 out of 5,600+ characters. See our top-ranked characters and read their profiles.