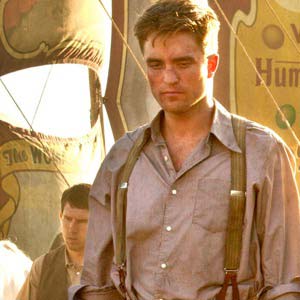 Grew up… in Norwich, New York, dreaming of becoming a veterinarian. Jacob did attend Cornell to become a veterinarian, but he dropped out just before he took his final exams. After he found out his parents had died, he left school, never to return.

Living… on the road, in the Depression era. Jacob has joined the Benzini Brothers circus, where he’s able to use his veterinarian skills without requiring certification. Jacob didn’t even mean to join, but he happened to jump aboard the train that was carrying the circus. Rather than being thrown off, he made his skills useful.

Interests… teaching Polish to the circus manager, August. Rosie the elephant will only respond to Polish commands, and since August needs to perform with her, he needs to know the language. But Jacob would rather avoid the unpredictable and intimidating August.

Relationship Status… in love. Unfortunately, the woman he’s in love with is August’s wife, Marlena. August is dangerous, and Jacob is torn between wanting to avoid him, and wanting to protect Marlena from his abuse.

Challenge… trying to fit in at the circus and dealing with August. Jacob is the most educated out of all the circus people, and he stands out. There’s a lot he has to learn about circus culture before he can settle down and make friends. And on top of that, his boss August is a paranoid schizophrenic, liable to make life difficult for Jacob even if Jacob wasn’t in love with his wife.

Personality… compassionate. Jacob can’t stand to see anyone mistreated. He loves Rosie almost as much as Marlena, and he’s determined to protect the both of them.

Jacob Jankowski's popularity ranking on CharacTour is #2551 out of 5,600+ characters. See our top-ranked characters and read their profiles.