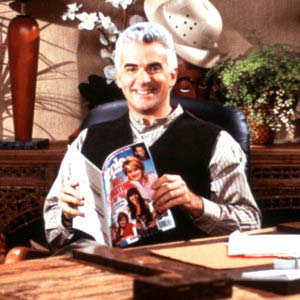 Living... in New York City. He has resided and operated his company here for many years but doesn't seem to be shaped too heavily by his environment, often appearing to be from another planet entirely in fact.

Profession... owner of The J. Peterman Catalog, a clothing sales company known for writing poetic embellishments of its "chic" fashions. He is very well known in the industry and has been quite successful. One of his top-level employees is Elaine Benes, though it’s debatable how great an asset Elaine is to the company.

Interests... travel. Peterman fancies himself a world traveler, often leaving the country for extended periods of time on quests for what he thinks will be the next big fashion trends. And he is never short of nearly unbelievable tales from his adventures, of course usually tying back to the most recent clothing item he’s hawking: "Then, in the distance, I heard the bulls. I began running as fast as I could. Fortunately, I was wearing my Italian cap-toe oxfords. Sophisticated yet different; nothing to make a huge fuss about."

Relationship Status... single. There is rarely any reference to Peterman's love life aside from his occasional mention of several wild and extravagant affairs during his travels.

Challenge... social awkwardness. Peterman can have a difficult time conversing with others, even though he doesn't seem to think so. He speaks in a perpetually enchanted, almost operatic way, sharing lengthy stories filled with clichés and abstract metaphors, rarely letting the person he is talking to get a word in edgewise.  He often comes off as naive or sarcastic due to dramatic ramblings but speaks with the utmost genuineness, making him both hard to ignore and nearly impossible to take seriously.

Personality... eccentric. He is known for being well-spoken while also being bafflingly obtuse and quick to jump to conclusions. He regularly offers whole-heartedly stated truisms, for example responding to a sobbing Elaine's, "I don't even know where I'm going," with the consolation, "Well, that's the best way to get some place you've never been." He is well-meaning, though, and he regularly shows that he is a truly caring person, even in light of his sometimes bizarre behavior.

J. Peterman's popularity ranking on CharacTour is #3751 out of 5,300+ characters. See our top-ranked characters and read their profiles.