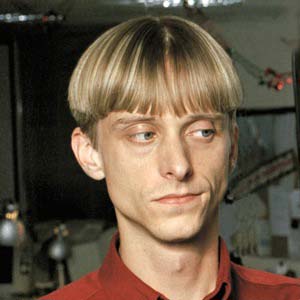 Living… in Slough, England, but he could just as easily live in the wild, given his survival skills. Why, just ask him: “You know the phrase ‘softly softly catchee monkey’? …I could catch a monkey – if I was starving I could. I’d make poison darts out of the poison off deadly frogs. One milligram of that poison can kill a monkey. Or a man. Prick yourself, you’ll be dead within a day. Or longer. Different frogs, different times.”

Profession… assistant-to-the-regional-manager at Wernham Hogg paper company, where almost no one can stand him. He’s all too willing to buy into boss David Brent’s shtick, causing even David to be creeped out by him. Gareth is the butt of almost all of co-worker Tim’s pranks, to the delight of everyone else. If Gareth can’t pick up his phone, it’s probably because Tim glued the receiver.

Interests… the Territorial Army, where he allegedly reached the rank of lieutenant. His supposed rank and military skills are a source of pride for him and annoyance for everyone else. He’s quick to point out that in case of emergencies or disasters, he’d likely be the only one to survive. Of course if there were an emergency at Wernham Hogg, Gareth would be the most likely cause.

Relationship Status… happily single. Gareth likes to frequent the local nightclub Chasers with his friends “Jimmy the Perv” and “The Oggmonster.” He actually does pick up women occasionally, until they get to know him better. Occasionally Gareth tries to flirt with female co-workers but is quickly rejected.

Challenge… not having his persona revealed as false. For all his talk of military discipline, Gareth can be weak and anxious in moments of actual stress. He has issues with David’s jocular management style, arguing for a more disciplined and fearful work environment. In truth, Gareth truly thinks he could do the job better, and would love nothing more than to try.

Personality… obliviously smug. Unlike his chronically unsatisfied co-workers, Gareth is quite pleased with himself. Not only that, he relishes in correcting others’ behavior. Everyone eagerly waits to see him fall flat on his face, hoping it’ll humanize him. Don’t worry – it won’t.

Gareth Keenan's popularity ranking on CharacTour is #3934 out of 5,600+ characters. See our top-ranked characters and read their profiles.