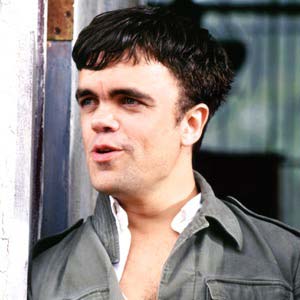 Living… in an abandoned train station in rural New Jersey. After his only friend, Henry Styles, dies suddenly, Fin discovers that Henry has left him a piece of property. Fin leaves his Hoboken apartment to start his life as a (hopefully) solitary man. Fin has dwarfism, and being treated as an oddity by society at large has doubtless contributed to his reluctance to socialize.

Profession… model train repairman. It’s the perfect job for him – he doesn’t have to interact with anyone and he gets to think about trains all day. However, Fin retires when Henry, his boss at the model train store, dies. Now he’s trying hard to do literally nothing but sit by the tracks alone and watch trains go by.

Relationship Status… single, in all possible ways. Fin’s closest relationship is (or was) to Henry. Once he’s gone, Fin is free to ignore humanity and watch trains to his heart’s content. Unfortunately, Joe, the chatty coffee vendor who parks outside the station, keeps coming by to hang out with Fin no matter how many times Fin brushes him off.

Challenge…. getting Joe to leave him alone. Also, not being run over by the eccentric artist, Olivia, whose control of her SUV leaves something to be desired. Fin just wants to live life without having to interact with anyone, but the people in this new town seem determined to break through his isolation.

Personality… incredibly introverted, stoic, and possibly depressed. It’s never been easy for Fin to fit in – his dwarfism likely didn’t help – and when his lone friend Henry died, he retreated into his love of trains. He tells himself and the rest of the world that he has no interest in human contact, even though the rest of the world doesn’t believe him. Because Fin doesn’t deal well with people, no one can really tell if he’s happy being alone. Joe certainly seems to think that Fin needs company. Maybe it will do Fin some good after all.

Finbar McBride's popularity ranking on CharacTour is #4285 out of 5,300+ characters. See our top-ranked characters and read their profiles.