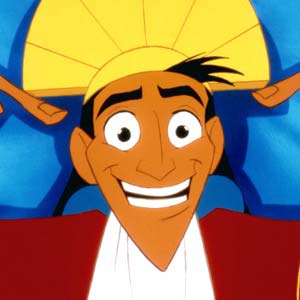 Grew Up… wanting for nothing. Even as a child Kuzco was the emperor of the Incan Empire. As a result he’s been waited on hand and foot since he left the womb.

Living… as a llama. After Kuzco fired his longtime advisor and scientist Yzma, she concocted a potion to kill him, although due to a mix-up it simply changed Kuzo into a beast of burden. It’s a change of pace to go from privileged teenage emperor to talking animal, and, understandably, Kuzco has trouble adjusting.

Profession… emperor, although Kuzco doesn’t take his professional responsibilities very seriously. As the emperor he’s beyond reproach, and pretty much spends all his time goofing on and spending his exorbant amounts of wealth. The only time he takes an active interest in his people is when he wants something from them – his latest pet project is a personal waterpark called “Kuzcotopia.” He just has to demolish the family home of the peasant Pacha before he can begin construction.

Interests… himself. Kuzco’s unbelievably privileged existence has stunted pretty much all empathy for other human beings. He moves from one opulent material pleasure to the next, continually amused but never satisfied.

Relationship Status… single. Kuzco is a teenager and seems disinterested in romance. He’s too busy trying to build his waterpark.

Challenge… getting back to the Imperial Palace so he can find someone to turn him back into a human. After Kuzco was turned into a llama he was knocked unconscious, placed in a bag, and unwittingly carried by Pacha back to the peasant’s home (and future site of Kuzcotopia.) While Kuzco is entitled, arrogant, and intent on destroying Pacha’s home, the peasant recognizes that he has no idea how to function in the real world, and will surely die without his help. The two set out to make the long journey back to Kuzco’s home, all the while trying to avoid the murderous Yzma, who is determined to finish the job and kill the emperor before he returns to claim the Incan throne.

Personality… chatty, prone to panic, and unbelievably selfish. Kuzco has been sheltered from the real world, and never had to deal with anything that even remotely resembled a real problem. He thinks he’s the center of the world, but somewhere in him there’s a spark of decency.

Emperor Kuzco's popularity ranking on CharacTour is #1835 out of 5,600+ characters. See our top-ranked characters and read their profiles.