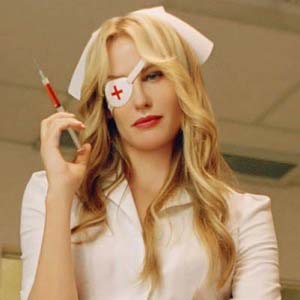 Overview... a one-eyed assassin. Elle has a knack for samurai swordplay and demonic behavior. After all she was once part of the “Deadly Viper Assassination Squad,” which was created by skilled assassin Bill, with whom she is still in love.

Personality… cruel, murderous, and unforgiving. Elle has almost no redeeming qualities. Her only grain of sympathy comes from the fact that her trainer, Pai Mei, tore out her right eye when she called him a “miserable old fool,” which kind of goes to show that she had it coming. Her code-name is California Mountain Snake and she’d sooner hide a venomous snake in a suitcase of money than actually make an honest deal.

Elle Driver's popularity ranking on CharacTour is #1326 out of 5,600+ characters. See our top-ranked characters and read their profiles.