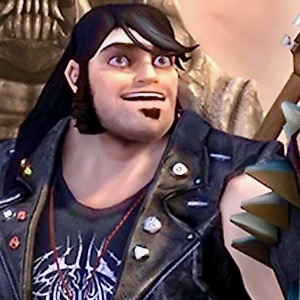 Living... on the road. Eddie never knew his parents, so he let himself be raised by heavy metal instead. He travels across the country working as a roadie, eager to answer the call to action and help any hard-rocking band that needs him. Unfortunately he has to work for Kabbage Boy instead.

Visiting... Brütal Land, in the Age of Metal World. After spilling his blood on a cursed amulet/belt buckle and accidently unleashing an ancient deadly fire beast onstage during a gig, Eddie is sucked back in time into a hellish fantasy world reminiscent of heavy metal album covers and mythology.

Interests… playing heavy metal music. In addition to his technical skills, Eddie is also a great musician in his own right, able to read and perform complicated guitar solos without any practice.

Relationship Status... in love. Eddie is smitten with fellow human resistance fighter Ophelia. He can get a little jealous when she’s around other guys, but he’ll also do anything to keep her safe from attacking demons.

Challenge... freeing the human race. Eddie discovers that in the Age of Metal World, humans are enslaved by the evil forces of a demon known as Doviculus, Emperor of the Tainted Coil. Eddie then teams up with the resistance to lead his people to hard-rocking freedom with Clementine, his magical flying V guitar; and The Separator, his battle axe. As he says to his enemies, “Rock can heal, but sometimes it hurts.”

Personality... surprisingly capable. Eddie can seem snarky and immature, but he has a strong sense of justice. When people are counting on him, he turns out to be a pretty great leader, wise advisor, and good friend.

Eddie Riggs's popularity ranking on CharacTour is #2070 out of 5,300+ characters. See our top-ranked characters and read their profiles.