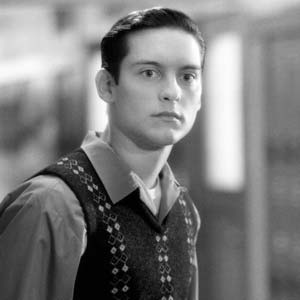 Living… in his average late 1990s family with his shallow and self-absorbed twin sister Jennifer and their mother. Unfortunately, everyone in his family seems to be fighting, whether it’s his mother and her ex-husband, or David and his sister.

Visiting… the 1950s in the black-and-white, perfect world of Pleasantville. David and his sister Jennifer just found themselves mysteriously transported into the fictional world, where they soon realize that they’re now characters in the old TV show named Bud and Mary Sue, the son and daughter of Betty and George Parker. Pleasantville is an idyllic and wholesome world, where it never even rains and everything is scripted.

Profession… high school student. David is just a young man who doesn’t really care about fitting in or being popular like his sister does, and prefers to spend his time alone in front of the television. But inside the world of Pleasantville, where he’s known by the town as Bud, he works at as a soda jerk at the local cheeseburger and soda fountain joint.

Interests… watching television. David, a TV trivia expert, loves lounging on the couch and watching his favorite shows like Pleasantville. One night while their mother is away, David wants to watch a marathon of the show, but gets into a fight with his sister who wants to watch MTV, and they end up breaking the remote control.

Relationship Status… single. Although David was too socially awkward for a girlfriend in the real world, in Pleasantville, he finds that he can be charming, given that he knows everything about the show. He even catches the eye of a young woman named Margaret, who bakes him cookies to show him her affection, so he asks her on a date.

Challenge… blending into the world of Pleasantville. After a mysterious TV repairman "repairs" their remote control, David and Jennifer become trapped inside Pleasantville. The citizens of Pleasantville know nothing beyond their small town and they all think that David and Jennifer are just two perfect 1950s high school students. However, as Jennifer and David fail to fit in completely when Jennifer introduces the idea of sex and other outside values, the entire town starts changing. Suddenly, the citizens who rebel become vividly colorful and subsequently outcast by the rest of Pleasantville. It seems that some townsfolk don’t take too kindly to change and aim to keep things the same, just as they’ve always been.

Personality… introverted, innocent, and awkward, but coming out of his shell. David has never really fit into the decade of the ‘90s that he was born in. He’s not cool or popular like his sister, and is generally quiet and a bit lonely. While awkward and different in the real world, in Pleasantville David finds that he’s able to fit in easily and actually finds himself enjoying the strange new world. Getting stuck inside his TV may be the best thing that ever happened to him.

David Wagner's popularity ranking on CharacTour is #4306 out of 5,600+ characters. See our top-ranked characters and read their profiles.