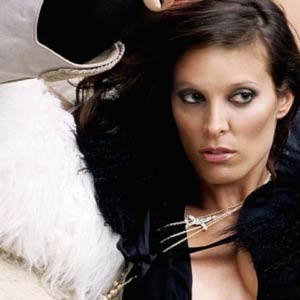 Grew up… with a conservative family. Dana knew she wouldn’t be accepted in her home as a lesbian, so she hid it from her family and even denied it to herself for a long time.

Living… in Los Angeles in the West Hollywood area. Dana meets Alice Pieszecki and the rest of her friends when Alice interviews her for a magazine article.

Profession… professional tennis player. Dana is a very talented player and is becoming popular enough that she might just get a sponsorship for her talents.

Interests… running and tennis. Dana devotes her entire life to playing tennis, so in order to be the best she has to stay in top shape. She loves to run, even if her friends don’t really want to join her because she’s so intense about it.

Relationship Status… engaged. Dana recently proposed to her long-time girlfriend Tonya, who also happens to be Dana’s manager. This causes a lot of tension between them, especially when Tonya starts taking over Dana’s life (and her money). Frustrated, Dana can’t seem to keep her eyes off of her friend Alice, who is very attracted to her.

Challenge… dealing with her sexuality. Dana has always been conflicted about being honest about her identity because of her family. But now that she’s an adult, she’s slowly admitting and opening up.

Personality… neurotic, serious, and disciplined. Dana is insecure about her sexuality and somewhat timid, which leads others to take advantage of her. Despite her naiveté, she’s very caring and loyal to her friends. A dedicated athlete, Dana is very devoted to her daily rituals and is very competitive.

Dana Fairbanks's popularity ranking on CharacTour is #3773 out of 5,300+ characters. See our top-ranked characters and read their profiles.