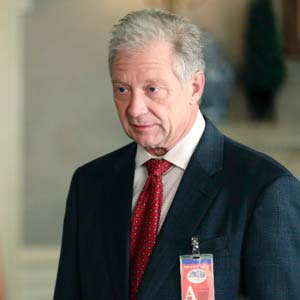 Living... in Washington D.C with his husband, James Novak, but he might as well live in the White House.

Profession... Chief of Staff. Right-hand man to the President of the United States, Cyrus feels (justifiably) responsible for putting Fitzgerald Grant (“Fitz” to his friends) in office. However, while managing Fitz through many misdeeds and affairs, he spends much of his time feeling more like a babysitter than a political advisor. Nevertheless, Cyrus has faith in his investment, telling Olivia Pope, a savvy political operator and Fitz’s sometimes mistress, that Fitz was “born to be a leader. He was born to do this. Anything else would diminish him and deprive this country.” As such, he allows Fitz to bring him constantly to the brink of insanity – and heart attacks – in the hopes that Fitz will be his winner.

Interests... political machinations. Cyrus knows that he will never be president, but even so, he lives for the political intrigue that the White House offers. Describing himself, Cyrus unabashedly admits, “The nitty-gritty, morally bankrupt, back-alley-brawling rest of the game, that's me. It's filthy and thankless, and it's my hallelujah, heroin, and reason to breathe.”

Relationship Status... married. Cyrus's husband, James, is a journalist who sometimes reports on White House events, which often puts the two at odds. Unfortunately, Cyrus is not above manipulating his husband to achieve his own political goals, which jeopardizes their relationship even more. Nevertheless, James is still ready to settle down and have a baby, but Cyrus's dedication to the job makes this difficult.

Challenge... keeping the White House afloat. Cyrus often has to deal with a stubborn president, a scheming First Lady (Mellie Grant), a (sometimes) contentious Olivia Pope, a probing husband, and the general mayhem in D.C., All that drama is equally exciting and exhausting for this extremely political animal. However, when all of these issues begin to pile up, even Cyrus has to wonder if he can survive this presidency.

Personality... manipulative, ambitious, and a self-described “monster.” Having embraced his darker side, there is virtually nothing that Cyrus is not willing to do to maintain his power. Much of this comes from his belief that he has been deprived of being the great president that he knows he could have been. He admits: “I have backbone. I have the will. I would have been a great president. But guess what? I’m fairly short, and I’m not so pretty, and I really like having sex with men. So instead of being president of this land that I love, I get to be the guy behind the president of the United States. And sure, I have power. I influence decisions. I help steer the country. But I’ll never be in the history books. My name will never be on an airport or a doctrine. Being the guy behind the guy is as far as my road goes.” So instead, Cyrus is left to put his faith in Fitz and hope that he did not bet on the wrong horse.

Cyrus Beene's popularity ranking on CharacTour is #2304 out of 5,300+ characters. See our top-ranked characters and read their profiles.