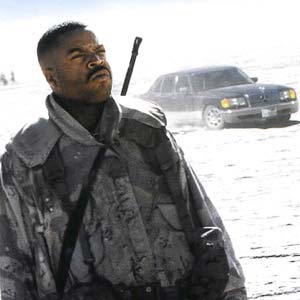 Living… in Iraq, with bumbling soldiers and a bunch of buffoons with guns. It’s the end of the Gulf War, and he sets out on a secret mission with Archie Gates and Troy Barlow to steal Sadam Hussein’s hidden gold bullion. He hopes to leave this country a lot richer than when they showedup. This all sounds like a good idea to Elgin – even if the map to the gold was found clenched between an Iraqi soldier’s butt cheeks.

Profession… staff sergeant. He has a high enough rank that he’s in command of just about every moron soldier around these parts. Elgin’s job back in the States was baggage handler at an airport and he would much rather return to the States a gold-toting king than go back to his old job.

Interests… cars. Elgin adamantly believes that “Lexus don’t make a convertible,” even when his partner in crime Troy bets him a Lexus that they do. Elgin accepts the bet and adds, “But it won’t be a convertible.”

Relationship Status… single. He doesn’t have a girlfriend here in Iraq, where the mortars fly about as often as his ignored orders to stop partying.

Challenge… liberating the Iraqi people while stealing the secret gold. His partners want to stick to the “plan for the gold,” but Elgin urges them to “hold on. We can help these people first, and then we can be on our way.”

Personality… a kind-hearted soldier, whose understanding of the hierarchy of command is less important to him than his high value of the price of civilian life. He becomes instrumental in helping Iraqi refugees escape persecution from the powers that be. He’s a good man – who can blame him for wanting a little bit of gold on the side?

Chief Elgin's popularity ranking on CharacTour is #5258 out of 5,600+ characters. See our top-ranked characters and read their profiles.