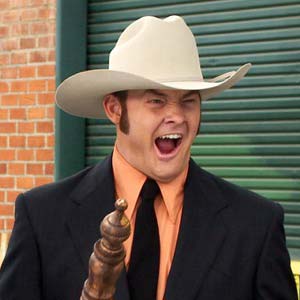 Anchorman: The Legend of Ron Burgundy

Overview... sportscaster at KVWN channel 4, a San Diego TV station. Champ supports his buddy, anchorman Ron Burgundy, through thick and thin. That’s especially true when a new anchorwoman, Veronica Corningstone, comes to work at the station and disrupts the boy’s club they so cherished.

Personality… rowdy, fun, and fearless. It’s 1974 and Champ is as American as apple pie. He’s the kind of sportscaster who really goes to games on the weekends with his boys and has a beer, or ten. He’s also a misogynistic pig, but that doesn’t make him much of an outlier in his world.

Champ Kind's popularity ranking on CharacTour is #4074 out of 5,600+ characters. See our top-ranked characters and read their profiles.