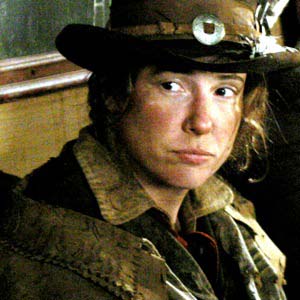 Grew up… working for General Custer during the Indian Wars. “Calamity” Jane Canary learned to swear, drink and fight from her mentor and idol, Wild Bill Hickok.

Living… in the Deadwood camp. Calamity Jane isn’t very picky about where she lives, so long as it’s close to Wild Bill. In her (somewhat cleaned-up) words, any "domicile but the graveyard suits me fine.”

Profession… gunslinger. Jane, as one of the relatively few women in the American West, had to learn to fend for herself from a young age. She has learned to put up a fearless and belligerent guise in order to mask her inner wounds.

Interests… drinking and swearing. Jane isn’t picky when it comes to booze, she’ll drink anything “that ain’t been previously swallowed.” Despite her hard-drinking and trash-talking persona, she shows genuine care and empathy for the sick and wounded in Deadwood, especially children.

Relationship Status… single, though Jane is very fond of Wild Bill Hickok. He’s pretty much the only one in Deadwood – aside from Doc Cochran and his patients, and maybe Bella Union madam Joanie Stubbs – who usually receives a kind word from Jane.

Challenge… surviving. Life in the Wild West is difficult for everyone, but especially for women. Though Jane has done a good job of standing her ground and protecting herself, she seems to be a lost soul, looking to find something (or someone) to love.

Personality… cantankerous and foul-mouthed. Jane can’t seem to utter more than 10 words without cursing or making a threat of some kind. Her friends, though, know that Jane is a kind and loyal woman deep down.

Calamity Jane's popularity ranking on CharacTour is #3165 out of 5,600+ characters. See our top-ranked characters and read their profiles.