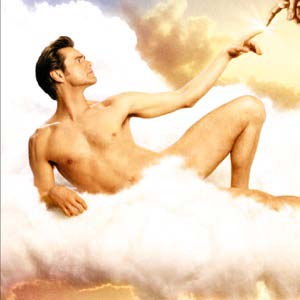 Living... in Buffalo, New York, where he used to have a mediocre job, a mediocre apartment and a mediocre life. But that's all changed: God answered his prayers and now Bruce has taken God’s place for a week.

Profession... at a dead end. As a television field reporter, he has been covering silly stories such as contests for Buffalo's Biggest Cookie. He thought he finally had a chance to move up to the coveted nightly anchor position, but then Evan Baxter got it. While covering an anniversary cruise of the Maid of the Mist, the famous Niagara Falls tour boat, Bruce had a meltdown on air and was fired.

Interests... testing the limits of his new Godly powers. He got back at Evan Baxter when he was on air by turning him into a tongue-tied idiot with flatulence issues. He never faces traffic jams because he can part them like the Red Sea. Bruce can even move the moon to put it closer to his window.

Relationship Status... in a fragile relationship. He has always put his career first – whether it’s his work on TV or his work as God Almighty. What his girlfriend Grace doesn't understand is that he focused on his career so much because he thought that if he sacrificed now, they could have a much better life later. If he could have just one thing in the world, it would be to make Grace happy, so he’s using his powers to try to improve things. Their sex life has never been better.

Challenge... coping with powers no mortal is capable of handling. He thought being God was a gift. God gave him all of his power and let him use it any way he chose, as long as he didn't tell anyone or mess with free will. But God didn’t tell him the downsides of the job: God can't take a vacation, because he belongs to everyone at once, and there are no timeouts or lunch breaks. And Bruce’s “to do” pile is mounting with so many prayer requests that he can’t keep up.

Personality... self-involved, whiny, and immature. No one is perfect, but Bruce really needs to get his priorities straight if he wants to keep Grace. He hasn’t been the most mature person lately, but hopefully God has other plans for him.

Bruce Nolan's popularity ranking on CharacTour is #2755 out of 5,600+ characters. See our top-ranked characters and read their profiles.