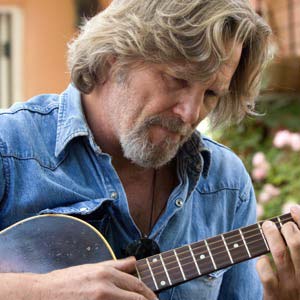 Grew up… in Houston, where he first learned how to sing about heartbreak. Bad Blake’s home will always be Texas, but he’s known wherever country music plays.

Living… in motels, mostly. Though nowadays, Bad Blake spends most of his time at the bottom of a bottle. He’s gone from headlining concerts to playing backstreet bars and bowling alleys. But after meeting a new woman, he’s been given a reason to change. Yes, it sounds just like a country song.

Profession… musician and songwriter. It’s all he’s ever wanted to do, and he’s been known to play through any kind of pain. In fact, he’s never missed a show in his life. As he puts it, “Son, I’ve played sick, drunk, divorced, and on the run.”

Interests… aside from booze, cigarettes, and women, Blake enjoys writing all kinds of songs about the hard life. It’s the only time he can find the spiritual relief that he craves.

Relationship Status… smitten with an attractive young journalist named Jean Craddock. Jean and her young son Buddy have been the driving force behind Blake’s recent recovery. Since meeting Jean, Blake has reunited with his former protégé, the successful Tommy Sweet.

Challenge… saving his own life and proving to Jean that he can be a responsible man. People call him “Bad” Blake for a reason – his hard-drinking, hard-living ways have made him his own worst enemy. After a series of booze-induced disasters, Blake is forced to choose between his relationship with Jean and his relationship with the bottle.

Personality… rough around the edges, yet kind and gentle. Bad Blake has left four divorces and an estranged son in his wake, yet he still manages to exude a sweet tenderness. “I’m Bad Blake,” he announces to Jean. “My tombstone will have my real name on it. Until them I’m just gonna stay Bad.”

Bad Blake's popularity ranking on CharacTour is #4712 out of 5,300+ characters. See our top-ranked characters and read their profiles.