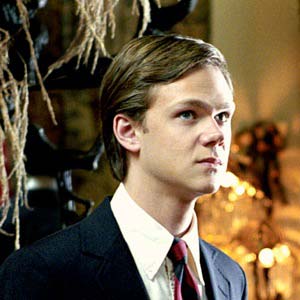 Grew Up... with his parents always fighting. They eventually separated. But after that his mother began to go crazy. As he says, "Not in a 'Let's paint the kitchen red!' sort of way. But crazy in a 'gas oven, toothpaste sandwich, I am God' sort of way." His drunk father didn't want him, so Augusten was sent away.

Living... with his mom's psychiatrist Dr. Finch who agreed to take care of him starting when he was 12. He lives with Dr. Finch's biological children and some others he adopted. At Dr. Finch's house, there are no rules for the kids – just total chaos. The house is a pigsty, with dishes piled up to the ceiling and a two-year-old Christmas tree with just a few needles left.

Profession... aspiring writer. Though for now he is resigned to being a high school student. He shows up at homeroom but then leaves most days to watch movies, read Stephen King books, or write in his journal. And since has no friends, no one really misses him.

Relationship Status... involved with Neil, Dr. Finch's adopted son, who is nearly 20 years older than him. Neil is Augusten’s first relationship since he came out.

Challenge... feeling torn between his mother and Dr. Finch. His mother claims that Dr. Finch has been controlling her, manipulating her emotionally and with drugs. She thinks he's a very sick man.

Personality... surprisingly normal for what he has been through. Augusten is coming of age in the most eccentric circumstances. His secret for getting through everything is just to laugh through the pain and record the good stories for a book some day. He certainly has a lot of strange material to work with.

Augusten Burroughs's popularity ranking on CharacTour is #4328 out of 5,600+ characters. See our top-ranked characters and read their profiles.