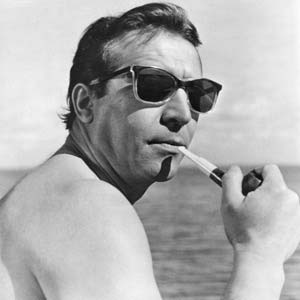 The Knife in the Water

Living… in the Polish countryside, where Andrzej and his wife have headed to their yacht for the weekend. On the way, they met a hitchhiker who wanted to be taken to the marina. The hitchhiker wanted to go off on his own and meet up afterwards, but he ended up on the boat with them instead. This kid isn’t in Andrzej’s class, but he decided to let the traveler on his boat for a day, thinking it would add an extra element of excitement to the trip.

Profession… writer. But right now he's a sailor; if two men are on board, one of them is the skipper, and that's Andrzej. He went to university, then started writing the “Sporting News.” He’s clearly cynical and dismissive towards his work, but then again, the guy is on vacation. He probably doesn’t want to bring his work onto the boat with him.

Interests… teaching this young traveler the ways of the sea. In the end, other than the prevailing peace of the ocean, there isn’t much one can do on a boat other than play with the knife the hitchhiker brought along with him. A knife isn’t something you’d necessarily need on a boat, but to be fair, the traveler didn’t think he’d be on a boat today. By the same token, Andrzej didn’t think he’d be around a knife. Other than that, the three play hide and seek, and even provocative games of fetch.

Relationship Status… married. But his wife Krystyna seemingly has taken a liking to the boy, or at least enjoys basking in his obvious attraction to her. She’ll passively flirt, singing for the young boy when he asks her to, letting him hold her shoe. Somehow, Andrzej lets this continue, as if he too takes pleasure in these subtle games. In truth, he’s never fully respected her as a woman, or her capacity to be faithful. He shudders to think what her love life would be like without him.

Challenge… asserting his male dominance over the traveler. In other words, not being made a fool of. As the boat trip continues, the young traveler becomes frustrated with Andrzej’s power plays. This leads him to behave erratically, as his only recourse to power is to be as unpredictable as possible. Andrzej doesn’t understand the traveler’s motivations, but is determined to assert himself as the man-in-charge. The mind games, subtext, and loaded statements might lead them all to a breaking point.

Personality… domineering and stubborn. Andrzej is always criticizing the ways other people do things, asserting that he can do them better himself. On their way to the retreat, Andrzej makes Krystyna pull over the car so he can drive. On the boat, he takes pleasure in telling both Krystyna and the young traveler what and what not to do. This creates a resentment towards him, where even his wife hopes to see him fail in front of this younger man. Andrzej, recognizing this resentment, pushes it to see how far it can go.

Andrzej's popularity ranking on CharacTour is #5130 out of 5,600+ characters. See our top-ranked characters and read their profiles.