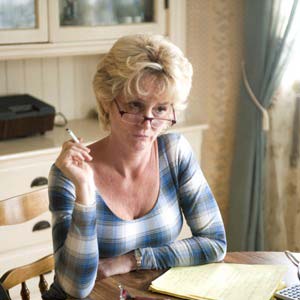 Living… with some combination of her nine kids in Lowell, Mass. It’s a loud house, because Alice and her kids (the relatively mild-mannered Micky aside) can really talk a blue streak. The Wards are not a family to cross because you’ll never hear the end of it – literally.

Profession… boxing manager for her son, Micky Ward. She’s the one who sets up the fights, schedules hotels, and does all the hard work outside of the ring – just ask her. She wants to see Micky get to the top more than anyone except (maybe) Micky himself. One major roadblock is Micky’s trainer, who happens to be Alice’s oldest son Dicky, and who also happens to be a crackhead. It was Dicky who everyone thinks had the real boxing talent in the family, once taking the great Sugar Ray Leonard the distance, but soon the drugs sapped his ability. But now it’s not entirely clear whether Alice and Dicky are helping Micky’s career, or hurting it.

Interests… her children. There’s nothing Alice spends more time on than her kids – especially Micky and Dicky. She also has seven other children, all girls. Alice and her daughters fight often; it seems like trading insults might be the only way they know to interact. Alice scolds one, “What are you doing opening your mouth in my kitchen? You owe me $200.”

Relationship Status… married to George Ward. They have a good-enough relationship, but Alice being Alice, it’s not always smooth sailing. Alice also likes to stick her nose in Micky’s relationships, feeling so threatened by his new girlfriend Charlene that she is consistently rude to her: “I don’t know who you are. Why are you talking?”

Challenge… managing Micky to the welterweight championship. This doesn’t only mean handling his business outside of the ring, but also helping get Dicky into good enough shape to actually train Micky. She also needs to listen to Micky more or he may well fire her as manager, whether she’s his mother or not.

Personality… sassy and matriarchal. Alice is the queen of her own little kingdom. She has enough kids that she could start her own little army if she really wanted to, and sometimes that seems to be her goal. (Good luck fighting off an invasion of the Ward women.) Alice tries to run everything in her kids’ lives, especially Micky’s. But she may have to learn to step back a bit for Micky to truly succeed.

Alice Ward's popularity ranking on CharacTour is #5044 out of 5,300+ characters. See our top-ranked characters and read their profiles.