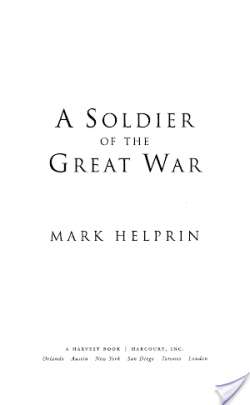 A Soldier of the Great War

For Alessandro Giullani, the young son of a prosperous Roman Lawyer, golden trees shimmer in the sun beneath a sky of perfect blue. At night the moon is amber and the city of Rome seethes with light. He races horses across the country to the sea, and in the Alps he practices the precise and sublime art of mountain climbing. At the ancient university in Bologna he is a student of painting and the science of beauty. And he falls in love. His is a world of adventure and dreams, of music, storm, and the spirit. Then the Great War intervenes. Half a century later, in August of 1964, Alessandro, a white-haired professor, still tall and proud, finds himself unexpectedly on the road with an illiterate young factory worker. As they walk toward Monte Prato, a village seventy kilometers distant, the old man tells the story of his life. How he became a soldier. A hero. A prisoner. A deserter. A wanderer in the hell that claimed Europe. And how he tragically lost one family and gained another. The boy is dazzled by the action and envious of the richness and color of the story, and realizes that the old man's magnificent tale of love and war is more than a tale: it is the recapitulation of his life, his reckoning with mortality, and above all, a love song for his family. This e-book includes a sample chapter of IN SUNLIGHT AND IN SHADOW.